Finally, I caught up with this IPO that will go public tomorrow, Mota Group.

So let’s quickly dive into the latest prospectus S-1/A.

This is actually scary…I like my drone to be a drone not specifically alive.

So the company makes drones and smartwearable stuff. Already, we should know that these two areas are quite competitive. With China coming after all the smartstuff companies, this is not the most friendly industry.

It sells the JetJAT drone lines. Let’s see what Amazon has to say.

Yeah…so this is not good, a not so good product in a competitive market.

Goldman Sachs forecasts that the drone market will be 38 billion by 2020 but the important thing is that it is uber competitive!

Going down, we see a going concern! That is not good…yup, the firm may go bankrupt.

Ok…I can stop right here and say avoid MOTA IPO. But I will go on just to see what else it has.

Oh, they 8% rate convertible bonds. Nice, for the guy who owns the convertible bond not really the equity investor. From use of proceeds, we see that IPO proceeds will be immediately used to pay down debt.

Ok, this is really funny. If the drone market is growing so fast, why is the firm’s revenue not increasing in pace with the industry? In fact, revenues decreased almost by half in 2016 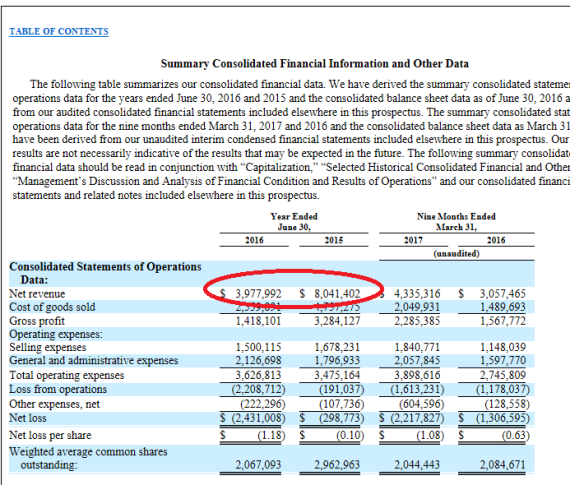 Ok…going down, the firm has an internal control weakness. So numbers may not be what they seem to be.

So, the CEO has some expertise on drones but we don’t have directors yet…

Well, at least the CEO and the CPO own the majority of the firm, so interests are aligned somewhat.

Overall, Mota is a pass!